The other night my wife and I went to see the recently released movie version of Les Misérables.  While I had been looking forward to seeing it, it turned out to be better than I ever imagined.  Based on Victor Hugo’s sweeping novel, it is a film of epic proportions that tells a story loaded with Kingdom values. 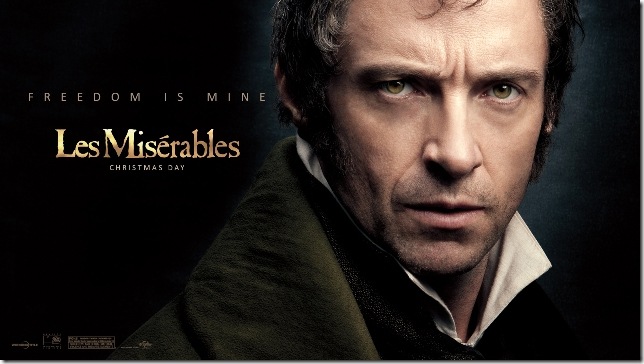 A Story of Contrasts

Les Misérables is a story of contrasts.  Throughout the movie one observes the contrasts of light and darkness, hope and despair, love and hate, vision and blindness, freedom and oppression.  While these things are woven throughout the story, the greatest contrast, in my humble opinion, is between the main character, Jean Valjean, and the ruthless Javert.

Jean Valjean was imprisoned for stealing a loaf of bread to save his dying nephew.  After being released he is given food and shelter by a saintly bishop.  Valjean steals some of the bishop’s silver and takes off in the wee hours of the morning.  He is apprehended by the police and brought back to the bishop.  The bishop demands that Jean Valjean be released, saying that he actually gave Valjean the silver.  He even gives him a couple of expensive silver candlesticks.  He claims Valjean’s soul for God and tells him he must use the silver to make a better man of himself.

Jean Valjean is literally a man wrecked by grace.  The mercy shown to him by the bishop strikes him in his very soul.  He dedicates himself to God and is determined to become an honest man.  He breaks his parole, changes his name, and set off to make a new life for himself.

Nine years later he has become a successful factory owner and mayor of his city.  His life is spent creating jobs and helping the less fortunate.  One that he helps is the ill-fated Fantine who has been unjustly cast into the streets.  Her daughter, Cosette, is in the custody of the wicked Thénardiers.  Valjean rescues Cosette and raises her as his own daughter, and eventually saves the life of her beloved Marius during a revolutionary battle in Paris.  Jean Valjean is a man changed by grace who, in turn, extends grace to all those around him, even his enemies.

Standing in stark contrast is Inspector Javert.  With a heart made of stone, all Javert knows is the law and judgment.  Determined to bring Jean Valjean to justice for breaking his parole, he will stop at nothing in his quest.  Eventually discovering Valjean in his new life, Javert is completely incapable of seeing him as a man who has been reformed.  He still views him as a criminal that must answer for his wrongs, and so continues to ardently pursue him.  Eventually Javert is captured by the French revolutionaries and faced with certain death.  Jean Valjean secures his release, saving his life while asking nothing in return.  Javert hardly knows how to respond.  His inability to reconcile the grace he sees in Valjean’s life and his own staunch adherence to the law eventually does him in.

The stories of these two men illustrate the difference between those living in the Reign of King Jesus, and those living in a religion where rules and regulations dominate.  Those who have been touched by the grace and forgiveness of the King tend to be gracious and forgiving toward others.  They tend to spend their lives reaching out to those around them in order to draw them into the same love and life they have experienced.  Theirs is a joyful existence of loving and lifting others on the King’s behalf.

Those locked in religion tend to divide people into two categories:  those like them, and those not like them.  They tend to be harsh and judgmental, relating to people largely on the basis of their failure to keep the rules.  Mercy is looked upon as weakness and grace as compromise.  Theirs is a tormented existence fueled by the frustration of not getting others to view life their way.  So it has always been, so it will always be.

Go and See It

There is much that I found inspiring in Les Misérables.  The stirring song the revolutionaries sing about looking forward to a better tomorrow reminded me of what we are all waiting for, that Day when peace and justice will reign in the coming Kingdom of God.  I was also particularly struck when Jean Valjean sang, “To love another person is to see the face of God.”  I thought to myself, “Really?”  Then I remembered the words of the King, “Truly, I say to you, as you did it to one of the least of these my brothers, you did it to me.”  It warmed my heart to realize Valjean was right.

As Hugo wrote in his preface to the novel.

“So long as there shall exist, by virtue of law and custom, decrees of damnation pronounced by society, artificially creating hells amid the civilization of earth, and adding the element of human fate to divine destiny; so long as the three great problems of the century–the degradation of man through pauperism, the corruption of woman through hunger, the crippling of children through lack of light–are unsolved; so long as social asphyxia is possible in any part of the world;–in other words, and with a still wider significance, so long as ignorance and poverty exist on earth, books of the nature of Les Misérables cannot fail to be of use.” *

I encourage you to go and see the movie.  I believe it will provide you with great inspiration to continue living in the Reign.