As God’s people we seem to spend a tremendous amount of time trying to figure out who’s right and who’s wrong, who’s good and who’s bad, who’s in and who’s out, etc.  In one of the King’s stories, He points us to a Day when it will be all sorted out… 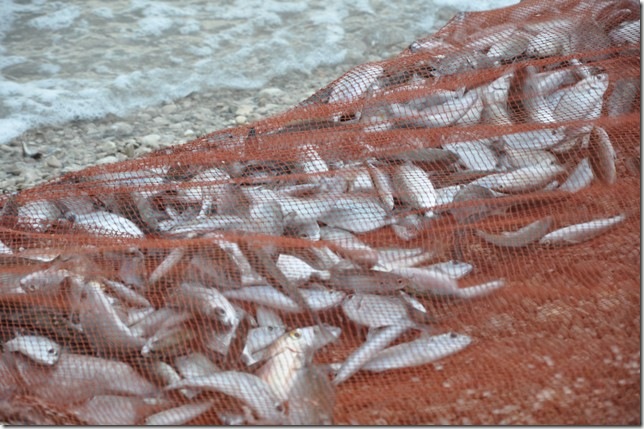 “Again, the kingdom of heaven is like a net that was thrown into the sea and gathered fish of every kind. When it was full, men drew it ashore and sat down and sorted the good into containers but threw away the bad. So it will be at the end of the age. The angels will come out and separate the evil from the righteous and throw them into the fiery furnace. In that place there will be weeping and gnashing of teeth.”  Matthew 13:47 – 50 ESV

Sorting Out the Story

Fishing was a big industry in the time of Jesus, so everyone could relate to this story.  To those who lived along the shores of of the Sea of Galilee, it was a normal sight to see fishermen sitting on the beach sorting out the days catch.  The good fish would be put into baskets to be hauled away to the market while the inedible ones would be cast aside for the seagulls to clean up.  This picture from everyday life provides a great illustration for how it will be in the Kingdom of God at the end of time.

It goes without saying that a mixed assortment of characters make up the company of God’s people.  Many are absolutely loyal to the King and seek to do His will with all their hearts.  Others, however, may have the Name of Jesus on their lips, but they do not have the nature of Jesus in their hearts.  While they may look very similar to the genuine followers of the King, they relate to life from a very different perspective.  Too often these find their way into a position of leadership on our church boards or mission committees and actually end up opposing the work of God.  So what can be done about this?

As was said in the post discussing the parable of the weeds, God does not permit us to go on witch hunts to try and sort out the good from the bad.  When the Church has done this in the past, a lot of good people were condemned along with the guilty.  This is not an option for us.  Instead of using our limited (not to mention biased) resources to try and sort things out ourselves, we should occupy ourselves with obeying the last commandment of the King which was to go and disciple all nations (Matthew 28:18 – 20).  At just the right time God, the Righteous Judge, will sort out His Kingdom, discarding the bad and gathering His true people to Himself.  We wait for this day with great anticipation.

Where Will We Find Ourselves?

One of the most troubling passages in all of Scripture is where the King says,

From what the King says here, it is not merely having His Name on our lips that counts.  It is having His nature in our hearts which will manifest itself in a life of loyal obedience.  In the Day when the King comes to sort out His Kingdom, we will definitely want to be found amoung those who are truly living in the Reign.