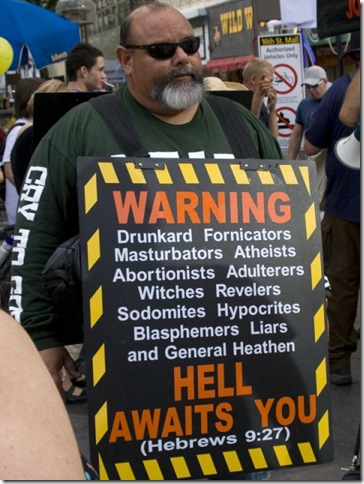 I’m sure I have written about this elsewhere, but I am continually frustrated over the church’s ability to make itself look foolish in the eyes of the world.  I’m not talking about the foolishness that is perceived as a result of genuinely following the Lord Jesus.  What I am talking about is some of the foolish ways the church has tried to engage today’s culture with its message.  When are we ever going to stop the nonsense and get back to what Jesus told us to do?

Recently a church in Ohio was picketed by a group of strippers, some of whom were topless.

Because the church in question has, on a regular basis, been picketing the strip club where the girls work.  According to the club owner, the church members are abusive to the dancers, even to the point of calling them names.  The church members have also, apparently, been abusing the patrons, taking pictures of their license plates and threatening to post them on the web for all to see.  Want guess what the results of all the church members activities has been?

Not one dancer has repented of her sins and come to the Lord.

Not one patron (that I know of) has repented of their sins and come to the Lord.

The club remains open for business.

I found it interesting that, during the interview, the club owner talked about how hypocritical and un-Christlike the actions of the church members are.  What makes it even sadder is that he was right.

The Pastor of the church, on the other hand, states that, as a minister in the local community, he feels it is his responsibility to let the strip club know that they have no place in his town.  While I am sure he is very sincere in his convictions, I not sure what his convictions are based on.  Having read the New Testament through numerous times, I have yet to find and directives given by the Lord Jesus or His followers to try and run businesses out of town.

And so the battle of wills ensues.

You can see the entire story here (don’t get your hopes up, gentlemen, nothing graphic is shown).

Why Do We Do This?

As most of us know, this is not an isolated incident.  All over the country there have been stories similar to this one.  There have been so-called Christians yelling at topless women on the beach that they were going to hell.  People have picketed parades and other public functions that have promoted the gay agenda, usually with extremely condemning messages on their signs.  None of this serves to promote the agenda of Jesus Christ.  All it does is make us look very bigoted and naive in the eyes of the world.

So why do we do it?  The truth is, I don’t know.  We don’t see Jesus doing it.  There are no recorded instances of Him ever picketing a brothel or screaming at a tax collector about how he was going to hell.  Never once does Jesus tell His followers to do it.  Instead Jesus tells us to go into all the world and proclaim the Good News (Mark 16:15).  Maybe if we would occupy ourselves with that, our impact might be more significant.

On the Flip Side

Recently we had a young lady by the name of Stephanie share in our church. Stephanie had been in Brazil during the FIFA World Cup Soccer event.  She went down there with Exodus Cry, a ministry dedicated to reaching out with the love of Jesus to those in the sex trade industry.

The first thing the team did was set up a 24 hour prayer and worship centre right across the street from one of the largest brothels in the area.  They were not there to pray against the sex trade industry.  They were there to pray for those who were caught in its trap.

From that point on they began to seek practical ways to show the love of Jesus to the prostitutes, both male and female.  They would give them gift bags that included items like lipstick and nail polish.  In the bags were also a Bible and a devotional.  The motto of the team was love without agenda.  Stephanie shared how amazing it was to see the walls come down and the workers open up just because someone gave them a simple gift.

This approach is obviously a far cry from picket signs and abusive behaviour.  The results are quite different as well.

Because time was limited, Stephanie could only share two stories of women who were redeemed out of the industry.  Both of these ladies were open to hear the truth shared by the Exodus Cry team because of the love they experienced from them.  Both of these ladies completely repented of their involvement in prostitution.  The last Stephanie knew, both women were involved in local churches and being discipled as followers of Jesus.

That sounds more the me like the Book of Acts in action.  What do you think?

Jesus made this statement in John 3:17.

For God did not send his Son into the world to condemn the world, but in order that the world might be saved through him.  ESV

If Jesus did not come to condemn the world, where do we get off offering condemnation instead of salvation?  Can we please stop this nonsense and put away our picket signs?  Can we please begin to once again proclaim the good news we find in Jesus Christ?  It’s only the good news that opens the door for others to start living in the Reign.

6 thoughts on “Can We Please Stop This?”