Well, it has finally happened.  The new movie Noah, starring Russell Crowe in the title role, has been released.  And, true to form, the reviews have gone haywire.  Some are touting it as a masterpiece.  Others are decrying it as blasphemy.  Some are pushing for everyone to see it.  Others are saying you shouldn’t waste your time and money.  All this hubbub, however, especially in the Christian world, leaves me with a few questions… 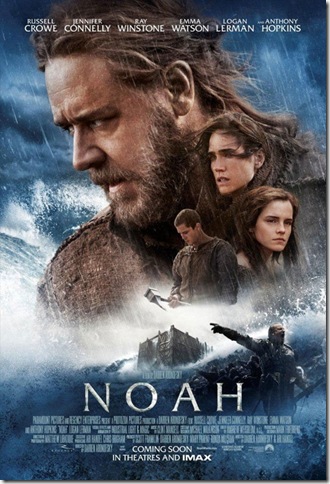 First of all, why should we expect Hollywood to produce a film that is 100% biblically accurate (especially when we Christians cannot seem to agree 100% on what the Bible teaches)? Neither Paramount Pictures, Regency Enterprises, Protozoa Pictures, or Disruption Enterprises (a part of Paramount) claim to be Christian companies (although one has to admit that Cecil B. DeMille, one of Paramount’s founding fathers, did a pretty epic job with The 10 Commandments back in 1956).  The film was not made for the glory of God or to teach theology.  The screenwriters took a story from the Bible, put their own twist on it, and the result was a film that was generated purely for the entertainment of the masses.  Didn’t they know there would be all kinds of drama resulting from the making of a film of this nature?  Of course they did!  All the kerfuffle works in their favour.  The more people talk and argue about it, the more people will go and view the film to see what all the fuss is about.  All of this adds up to tickets sold and dollars in their pockets.  Should we be surprised? Not in my books.  Did we fall for their strategy?  Yes, we did, once again.  Alas…

How Should We Respond?

So how should we respond to films like Noah?  I think we would do well to take counsel from the way the apostle Paul responded to the idolatrous city of Athens.  His spirit was totally provoked as he saw all the temples and shrines dedicated to the various pagan deities.  He, more than most, recognized that each idol was a representation of man’s rejection of the true and living God (Romans 1:18 – 23).  So what did he do?  Hop on the Internet to rave and rant about the evils of idolatry?  No (thank God!).  Instead, he used what was going on around him as a tool for starting a conversation regarding the truth.  Let’s look at how he did it.

22 So Paul, standing in the midst of the Areopagus, said: “Men of Athens, I perceive that in every way you are very religious. 23 For as I passed along and observed the objects of your worship, I found also an altar with this inscription, ‘To the unknown god.’ What therefore you worship as unknown, this I proclaim to you. 24 The God who made the world and everything in it, being Lord of heaven and earth, does not live in temples made by man, 25 nor is he served by human hands, as though he needed anything, since he himself gives to all mankind life and breath and everything. 26 And he made from one man every nation of mankind to live on all the face of the earth, having determined allotted periods and the boundaries of their dwelling place, 27 that they should seek God, and perhaps feel their way toward him and find him. Yet he is actually not far from each one of us, 28 for

“‘In him we live and move and have our being’;

as even some of your own poets have said,

“‘For we are indeed his offspring.’

29 Being then God’s offspring, we ought not to think that the divine being is like gold or silver or stone, an image formed by the art and imagination of man. 30 The times of ignorance God overlooked, but now he commands all people everywhere to repent, 31 because he has fixed a day on which he will judge the world in righteousness by a man whom he has appointed; and of this he has given assurance to all by raising him from the dead.”  Acts 17:22 – 31

I find this fascinating every time I read it.  He didn’t stand up and denounce their practices.  He didn’t even call them names!  Instead, he remembered an altar dedicated to the unknown god, and used it to launch into a discussion about the true and living God.  Widespread revival didn’t exactly breakout as a result of his amazing discourse, but there was fruit.

32 Now when they heard of the resurrection of the dead, some mocked. But others said, “We will hear you again about this.” 33 So Paul went out from their midst. 34 But some men joined him and believed, among whom also were Dionysius the Areopagite and a woman named Damaris and others with them.  Acts 17:32 – 34

The results will likely be the same when we use similar methods.

I am not about to tell you whether or not you should go and see Noah (I have not yet viewed it myself).  That is between you and your King.  I am, however, begging you to please don’t bother wasting your time cursing the darkness.  The results will not be worth the effort.  Instead, ask the Lord for creative ways to use what is at hand to turn on the light.  That is the best remedy for darkness.  Truth is always the best antidote for error.  Sometimes, however, we need to be like the apostle Paul and package it a little differently.  I think this will be a better way to respond for those of us who are living in the Reign.