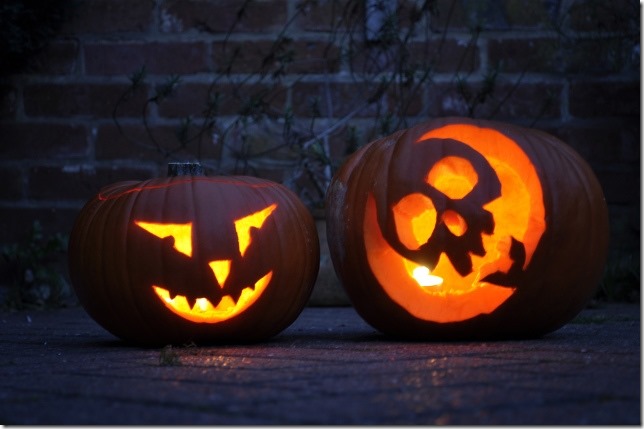 Well, it’s that time of year again.  Scary masks and all kinds of disgusting looking paraphernalia line the shelves of various retail outlets.  Kids are getting excited over the night when they can go out and plunder the neighborhood for loads of candy.  Sounds like fun, right?  (Not to mention fattening!)

Over the years I have posted my concerns about God’s people participating in Halloween.  The responses have been varied.  Some have agreed whole-heartedly.  Others have thought I was from the dark ages and deserved to be pitied.  All I am asking is that you take an honest look at what I have to share.  You are then free to draw your own conclusions.

THE ORIGIN OF HALLOWEEN

It all began many centuries ago in the British Isles among a group known as the Druids. The Druids worshipped many gods and believed in the immortality of the soul. Every year they celebrated a festival in honour of their god Samhain, lord of the dead. It was believed that the spirits of the dead returned to visit the living during the evening of the festival. Great bonfires were lit to guide these ghostly visitors and to ward off evil spirits roaming the countryside. Traditional Halloween fires were still being lighted in Scotland as late as the 19th century.

The name “Halloween” (or Hallowe’en) is a contraction derived from All Hallows Eve. When Christianity came to the British Isles, the Catholics celebrated All Saints Day (All Hallows) on November 1st. The festival of Samhain fell on the day before, the eve of All Hallows. It eventually became known as Hallows evening, or, Halloween.

One of the practices during this festival was for the Druids to roam the countryside soliciting donations from the local farmers. A donation brought with it a promise of a fertility blessing being placed on your farmland. A refusal to donate brought with it the threat of a curse being placed on the family and the crops. Hence we have the origin of the Halloween custom of “trick or treat”. While it may be cute for a group of little kids to say it when they come to your door, the message behind it is “appease the gods of the Druids or else!”

For centuries witches have considered Halloween to be their greatest day of the year. They believe that spirits (demons) are at the peak of their power, thus making more power available for their evil work. This is one of the reasons witches and devil costumes are so prevalent. It is commonly reported that witches and satanists still hold their Black Masses on this evening.

What about the jack-o-lantern? Surely there’s nothing wrong with something that seems so innocent and fun! According to Irish tradition, a man named Jack was condemned to walk the earth carrying a lantern until Judgment Day. Hence the idea of the jack-o-lantern is in keeping with the earliest traditions of Halloween.

A quick study will show that Halloween is deeply rooted in pagan tradition and the occult. One has to wonder how it became such a popular observance in the 20th century.

What is God’s perspective on our participation in such things as Halloween? I think there are a few places in Scriptures where we need to look to find our answer.

When the Lord was preparing to send His people into the Promise Land to possess it, He gave them some very clear instructions:

2 “When you drive out the nations that live there, you must destroy all the places where they worship their gods—high on the mountains, up on the hills, and under every green tree. 3 Break down their altars and smash their sacred pillars. Burn their Asherah poles and cut down their carved idols. Completely erase the names of their gods!” Deuteronomy 12:2-3 NLT

“He has delivered us from the domain of darkness and transferred us to the kingdom of His beloved Son…” Colossians 1:13 ESV

We have been delivered from the dominion of darkness by the death, burial and resurrection of the Lord Jesus Christ. Do we honour Him by participating in something that is so clearly from the dark side?

“…for at one time you were darkness, but now you are light in the Lord. Walk as children of light…Take no part in the unfruitful works of darkness, but instead expose them.” Ephesians 5:8, 11 ESV

Are we walking in the light of God when we participate in something like Halloween? Can people see God’s light in us when we practice something so obviously rooted in darkness? Does our participation expose the darkness, or promote it?  Most of God’s people would never think of indulging in occult practices like tarot cards or Ouija boards, yet think little about participating in this holiday that was birthed by the occult.

I encourage you to closely study the Scriptures we have listed and ask yourself the questions connected with them.

How About Redeeming the Time?

While it’s easy to stand around and bash Halloween as a pagan holiday, let’s not forget that our God is the ultimate Redeemer.  So how about turning things around and redeeming the holiday by turning it into an opportunity for outreach?  Verge Network offers a free guide for being missional during Halloween.  It even provides some tips on how to disciple your kids during this time of year. .

What I have posted here is merely for your consideration.  I am not about to sit in judgment over someone who chooses to participate in Halloween.  There is only one Judge to whom we will all give an account, and I am not Him.  For me and my house, however, I find the celebration of Halloween not to be congruent with living in the Reign.